The big news last week was that the federal government shut down on Tuesday, October 1 when Congress would not pass a 2014 budget bill. Since many federal agencies require their funding to be renewed each fiscal year, they were forced to shut down, furloughing 800,000 federal workers, and causing disruptions in services across the country.

So far, markets have largely shrugged off the shutdown as part of “business as usual” in D.C. However, as we head into the second week of the federal shutdown, uncertainty is rising. Currently, Congress appears to be at an impasse, and while the shutdown will have limited effects on our $16 trillion-plus economy [1], investors are starting to worry about the debt ceiling and a possible U.S. default.

It’s important to keep the current situation in perspective. There have been 17 federal government shutdowns since 1976 and none have resulted in long-term damage to markets; in fact, on average, markets had gained 1.1% one month after the end of the shutdown, as investors took advantage of the selloff.[2] While the past doesn’t predict the future, it’s important to note that we’re not in uncharted waters yet and the long-term effects of previous shutdowns have been negligible.

That being said, the effects of the shutdown are already being felt by firms that depend on government revenue. If the standoff continues, federal contractors could see their fourth-quarter revenues and productivity plummet.[3] The shutdown has also affected America's reputation abroad. Ongoing negotiations have caused the President to postpone multiple foreign policy visits, undermining U.S. reliability and possibly causing some allies to consider whether the U.S. will be able to uphold commitments abroad.[4]

While we hope that the shutdown ends soon, there are some factors that may cause the debates to drag on until the debt ceiling deadline. Currently, serious negotiation is being held up by Democrats’ and Republicans’ unwillingness to compromise their core positions. In broad strokes, the Democrats want the passage of a “clean” budget bill, free from conditions, while Republicans – led largely by the Tea Party contingent – want significant spending cuts to healthcare programs.[5]

Congress is also facing a vote on whether to raise the country’s $16.7 trillion debt ceiling. Lawmakers must raise the ceiling by October 17 in order to avoid a government debt default. While both sides have vowed not to let the country default on U.S. Treasuries, entrenched positions over the budget will make resolving the issue challenging.[6]

Looking ahead, we can expect continued volatility as investors wait out Washington and worry about the coming debt ceiling deadline. Several important economic reports are scheduled to come out this week, including data on September retail sales, consumer sentiment and inflation. With many federal agencies out of commission, we don’t know whether they will be released on schedule, adding to the murk surrounding the current state of economic affairs. On the positive side, it’s looking increasingly unlikely that we’re going to see any Federal Reserve tapering action this year. As always, we’ll continue to monitor the situation and keep you informed. If you have any concerns about your portfolio or any questions about how these issues may affect your investments, please reach out to us. We are always happy to help. 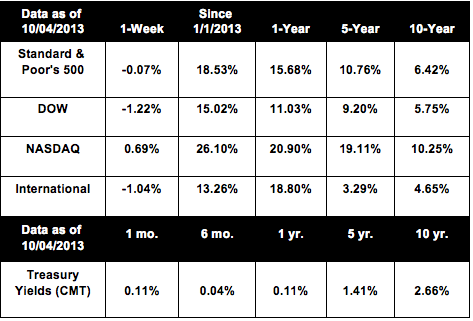 The Nasdaq is a computerized system that facilitates trading and provides price quotations on some 5,000 of the more actively traded over-the-counter stock.

ADP report shows dip in September jobs growth. While the ADP report is usually just a warmup for the official Labor Department data, the government shutdown meant ADP was the main event. Economists expected ADP to show 180,000 new jobs, but the report indicated that only 166,000 jobs were added in September; August jobs growth was also revised downward, suggesting that federal spending cuts may be affecting the job market.[7]

Obamacare applications hit a wall. The rollout of Healthcare.gov under the Affordable Care Act has faced numerous software and database problems. Some officials estimate that 99% of applications lack enough information to be processed, meaning some applicants may not have insurance in place by January 1.[8]

The U.S. is an energy superpower. New data from the Energy Information Administration (EIA) shows that the U.S. has surpassed Russia and Saudi Arabia and has become the world’s largest producer of petroleum and natural gas. This could improve America’s trade imbalance if excess production is exported overseas.[9]

Ireland will need EU support. A new IMF (International Money Fund) report warns that the precarious state of Irish banks is holding back the country’s recovery. The report also states that Ireland will need a line of credit from the EU in order to continue its recovery when IMF bailouts end this year.[10]