Friday’s Employment Situation report showed that the economy added a solid 165,000 jobs in April, dropping the headline unemployment rate to 7.5%. Even better, the report showed revised numbers for February and March, indicating that economic activity was stronger than originally estimated.[ii] On the downside, when we dig deeper into the jobs report, we see threats to consumer spending as the average weekly hours worked dropped to 34.4 while wages increased just 0.2%. Furthermore, what economists believe to be the widest measure of unemployment, the U-6, rose slightly to 13.9%, its lowest point since December 2008.[iii] The U-6 includes frustrated workers who have given up looking for a job, plus people who are working part-time because they can’t find full-time work. All factors considered, the jobs picture looks lukewarm.

We realize this information could raise some questions, so briefly, let’s take stock of how the recovery is progressing:

Hiring and unemployment are both growing at a measured pace. On the employment front, the economy has been adding an average of 196,000 jobs per month in 2013; this is far better than the 179,000 monthly average in 2011 and 2012, but still not as good as we would like. At the current rate of growth, the U.S. won’t reach pre-recession hiring levels for at least another year. The unemployment rate has improved drastically from its 10% peak in 2009; however, at 7.5%, the current rate is still recession level, and the Fed doesn’t expect to hit 6% until 2015 at the soonest.[iv]

The economy is improving slowly. The economic recovery from the recession is the slowest since WWII. The economy grew 2.12% in 2012 and 2.5% in Q1 2013; in a normal economic cycle, these growth numbers would be perfectly respectable, but we need higher growth during recovery periods to generate enough jobs to bring down unemployment. Economists had hoped to see stronger growth this year (even as high as 3-4%), but the combined effect of the new payroll tax and across-the-board sequestration cuts is dragging down economic performance.[v]

Economic fundamentals and stock market performance are looking better. Despite worries about higher payroll taxes, consumers spent at the strongest pace in two years during Q1 2013. This is good news since consumer spending accounts for 70% of economic growth. The housing market is booming, fueled by record-low mortgage rates and higher housing prices. New-home sales were up 18.5% in March (from the prior year), and homebuilders were working on more than 1 million new homes in March for the first time in five years. Markets are also performing well above expectations: For the year, the Dow has gained over 14% and the S&P 500 has increased by more than 13%, showing that investors are ready to pile onto any good news.[vi]

All told, the U.S. economy is doing pretty well. We could wish for a faster recovery, but we have to work with the hand we’re dealt. While we may see a slower second quarter, economists still expect healthy economic growth in 2013. 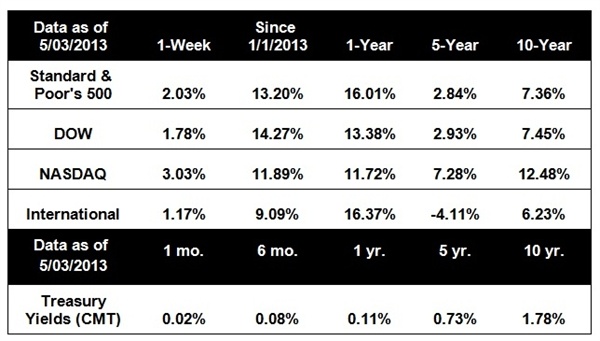 The Standard & Poor's 500 (S&P 500) is an unmanaged group of securities considered to be representative of the stock market in general.
The Dow Jones Industrial Average is a price-weighted average of 30 significant stocks traded on the New York Stock Exchange and the NASDAQ.
The Nasdaq is a computerized system that facilitates trading and provides price quotations on some 5,000 of the more actively traded over-the-counter stocks

Diversification does not guarantee profit nor is it guaranteed to protect assets The Standard & Poor's 500 (S&P 500) is an unmanaged group of securities considered to be representative of the stock market in general.

By clicking on these links, you will leave our server, as they are located on another server. We have not independently verified the information available through this link. The link is provided to you as a matter of interest. Please click on the links below to leave and proceed to the selected site.