Markets lost ground last week for the third week in the last four, pummeled by ongoing worry about the tapering of the Fed’s stimulus programs. Uncertainty about the longevity of Fed programs has contributed to an increase in volatility lately, and we will not be surprised if that continues in coming weeks. For the week, the S&P 500 lost 1%, the Dow slumped 1.17%, and the Nasdaq fell 1.32%.[i]

Despite the market losses, economic data was largely positive last week; while markets generally follow economic trends over the long term, sometimes outside factors can cause them to act in unexpected ways. Retail sales grew more than expected in May, increasing 0.6% instead of the 0.4% predicted by economists. Strong retail sales could indicate strong consumer spending, which is an important component of overall economic growth. Applications for unemployment benefits fell last week, indicating that the job market continues to improve. Taken together, improved retail sales and a stronger job market could indicate an increase in economic momentum after a slow start to the quarter.[ii] A reading of consumer sentiment fell in June after reaching a near six-year high in May; despite the decline, the June reading is still the second highest in eight months, showing that Americans are far from gloomy about the economy this quarter.[iii]

Markets may be dominated by news about the Federal Reserve this week,  and we can expect additional volatility ahead as investors try to anticipate the Fed’s next move. A scheduled FOMC meeting starts Tuesday and will be followed by an official announcement on Wednesday as well as economic forecasts. Realistically, despite some recent improvements in economic data, it’s unlikely that the central bank will make any policy changes at this week’s meeting, and we anticipate that Chairman Bernanke will attempt to soothe markets with his prepared remarks. Nonetheless, analysts will be hanging on to every official statement, trying to anticipate how the Fed will react to the economic data. 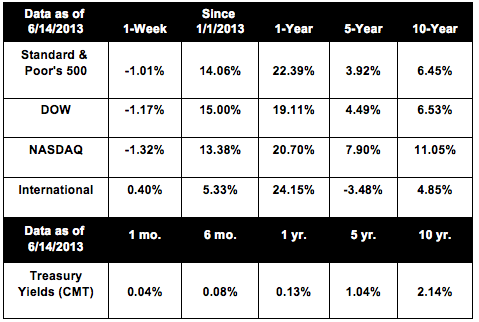 The Nasdaq is a computerized system that facilitates trading and provides price quotations on some 5,000 of the more actively traded over-the-counter stocks